History of the Grinnell Mill

Andrew and Robert Moody bought land for a mill in January 1811 and built a mill in 1813. The original building burned and was replaced with the present building in 1821. The new building was placed on the original limestone foundation. The earliest tax records that indicate a mill building at this site dates back to 1832. The mill was locally called Moody’s or Moodie’s Mill. Frank Grinnell bought the mill in 1864. A meadow across from the mill has seventeen springs and so the mill became known as the Spring Lea Mill. The Grinnell family owned the mill until 1948. Sometime during the 84 years that the Grinnell family owned the mill, the mill’s name changed to the Grinnell Mill.

Originally, the Grinnell Mill operated as a water-powered gristmill. A large undershot wooden waterwheel powered the driveshaft that turned two sets of buhrstones. The 1913 flood damaged the waterwheel and it was replaced with a Leffel turbine in 1914. The turbine was manufactured by the Leffel Company in nearby Springfield, Ohio. Grinnell Mill also had a sawmill at one time. A limestone processor for agricultural lime functioned at the mill from 1900 through 1937.

The mill closed in 1937 due to lack of business and illness. The structure was vacant until 1948 when Antioch College bought the mill and surrounding area and incorporated it into the Glen Helen Nature Preserve. A portion of the mill was converted into an apartment.

The dam is located 1,000 feet upstream on the Little Miami River. It was originally built by Robert and Andrew Moody in 1812. It was made of rock and wood and it served until the 1913 flood. In 1913 it was replaced with a new dam made of concrete and stone. In 1932, the present dam was built. It suffered damage in the 1937 flood. This dam is 100′ long. The water is channeled from above the dam into a 1000′ long millrace. The millrace and a sidecut that diverts much of the water back into the river before it reaches the mill was also built by the Moody brothers from 1811 through 1821. The millrace averages 25′ wide. The water was channeled into the turbine at the southwest corner of the mill and exited under the foundation into the tailrace.

The mill building is 2 ½ stories tall measuring 37’X37′ square. In 1977, the exterior was painted dark red and the windows were trimmed in cream. The building has a gable roof. Shake shingles have been covered with tin. There are six windows on each side of the mill and are 6 over 6 double hung sash type. The structure rests on the original 1812 limestone foundation built by the Moody’s. The limestone foundation is fully exposed and it is evident where the millrace entered and exited the foundation. The millrace and tailrace can be traced.

The foundation is over 190 years old. The building is over 180 years old. The area surrounding the mill is historically significant but not easily accessible. The miller’s house still exists but has been extensively altered. The Grinnell home is located on Grinnell Circle. It was built between 1855 and 1858 and remains an impressive structure. The private Grinnell Cemetary is close to the house with 20 old gravestones. 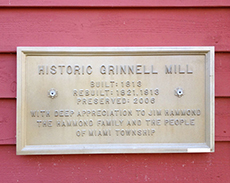